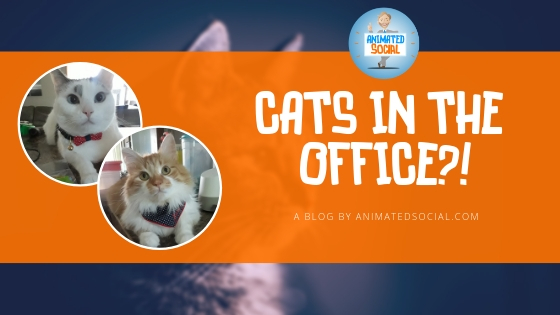 Cats in the Office?! 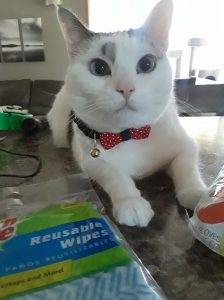 First up we have Ladibug. Ladibug, or Ladi for short, is the original AnimatedSocial office cat, and she was adopted the year that the business was started. She has been with us since the very beginning, and made her voiceover debut just over 2 years ago. Seriously, a client wanted a cat meow in their video, and she accepted the part! Ladibug, or Ladi for short, doesn’t require much attention. She loves sitting in her cat trees throughout the office during the day, but as soon as you have an important phone call or meeting, she is on your chair and crawling all over you in a heartbeat. She’s not a fan of work, and she tends to meow very loudly whenever it’s your turn to talk on the conference call.

Important person on the call: “Did anyone else hear that high pitched noise?!”

Give her some tuna treats or chin rubs, however, and she’ll be quiet and relaxed on your lap in moments! 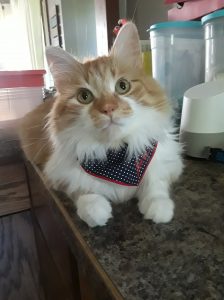 Next up we have Aslan. Aslan was adopted just under a year ago, and he has fit in since day 1. Well, with the humans, anyway. Ladi wasn’t too keen on sharing her office space with him for a day or two, but she quickly fell for his lion-like charm and now is often found nuzzled in his mane. Aslan loves meowing at closed doors (recording studios), eating, meowing while you’re attempting to do voiceovers, eating, meowing loudly while you’re attempting to do voiceovers, and snuggling. He loves attention and will let anyone carry him any where they want within moments of meeting them. He also doesn’t mind getting dressed up in fancy cat costumes, and has been known to be disguised as a hamburger, a pirate, and even a ladybug.

Do you have any pets in your office? Let us know in the comments below!

Have any questions or want to request a free quote for your next video project? Click here!